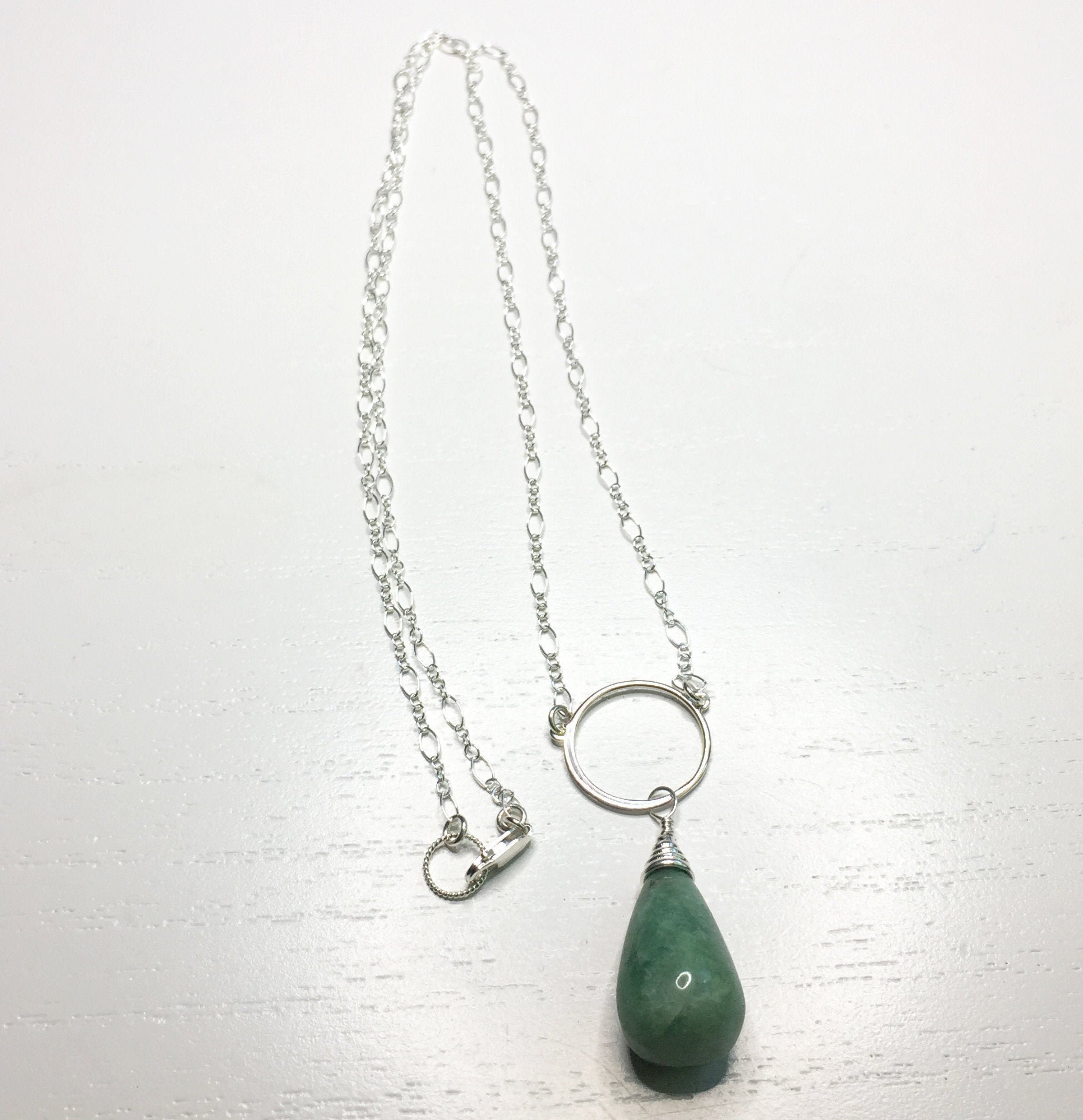 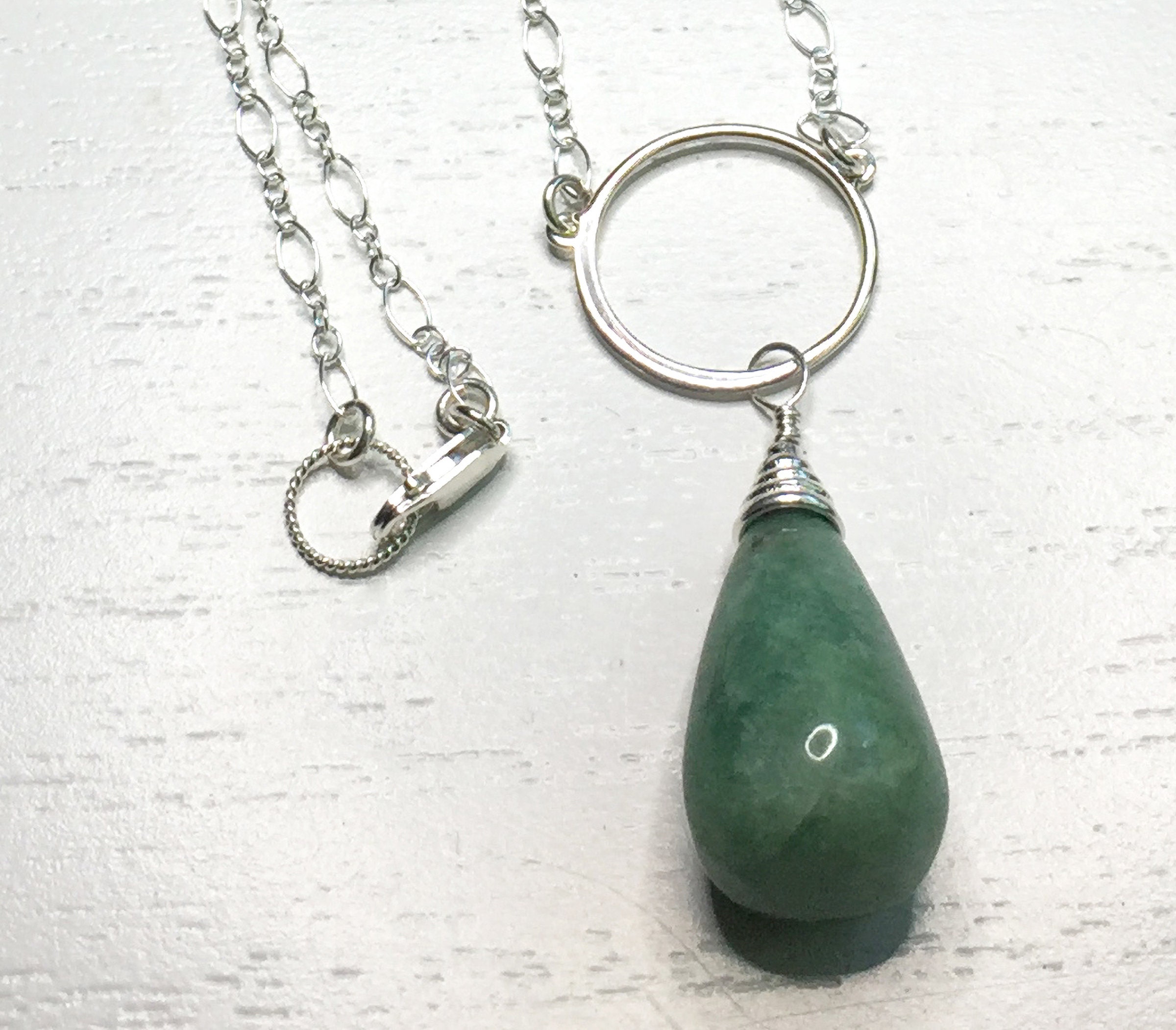 A beautiful, large 25mm smooth green African Emerald is suspended from a sterling silver circle and sterling silver chain. The necklace is approximately 33 inches with a 2 inches drop. The bead cap, all wire, lobster clasp and twisted circle are both sterling silver. *Note* If you would like a different lengthplease feel free to message us.


Care and Cleaning: Clean the beads with a damp soft cloth. The silver will tarnish and can be cleaned with any good silver cleaning product.

Shipping, Returns & Exchanges: Your necklace will be placed in a plastic bag to help prevent tarnishing and a box, then will be securely packaged and shipped within 1-2 business days (usually the same day). Full refund of purchase price if not delighted with your purchase. Please notify me within 7 days of receipt.

The name emerald comes from the Sanskrit word “marakata," which means spring green. Many legends and stories surround this magnificent and powerful stone. The Chaldeans, a kingdom of Biblical times, believed emeralds contained Ishtar, their goddess of love and war. In the Middle East, an emerald amulet would often be engraved with a verse from sacred religious texts.

Ancient Egyptians believed the green color of emerald represented fertility and rebirth. They would commonly carve emerald scarabs and place them at the heart of a mummy to make the deceased's health flourish in the afterlife. Cleopatra herself was known for her fascination with emeralds. Pale green emeralds were once thought by the Romans to be unripe and as they changed to a darker shade of green, they were maturing in potency. Gazing into the cool green color was reported by Pliny, an author and philosopher of ancient Rome, to ease eyestrain. The Roman emperor Nero Augustus reportedly watched gladiator games through a large emerald gemstone because he found the color to be calming.

In some legends, the Holy Grail used by Christ at the last supper was made from a giant emerald. Later, the emerald grail was used to collect his blood dripping from the cross, imbuing the grail with fantastic and holy powers.

This mesmerizing stone's velvety green color is unmistakable. The rich color is renowned as a color of spring and has long been a symbol of romance, hope and rebirth. As the precious gem associated with the goddess Venus, emerald is also commonly believed to aid in fertility.

Throughout history, emeralds have often been associated with various goddesses of love and beauty, such as Venus. Emeralds were commonly believed to protect lovers from unfaithfulness. If the heart remained loyal, the gem would glow a beautiful green color, but it was thought that if a lover's heart went astray, the green color would lose its luster and rich color.

Emeralds are believed to be encouraging, calming and balancing because of their color. They are also thought to promote creativity and restore optimistic hope in dreams and visions. They are thought to bring good fortune and are often seen in the cash boxes of business owners who seek to prosper in their endeavors.