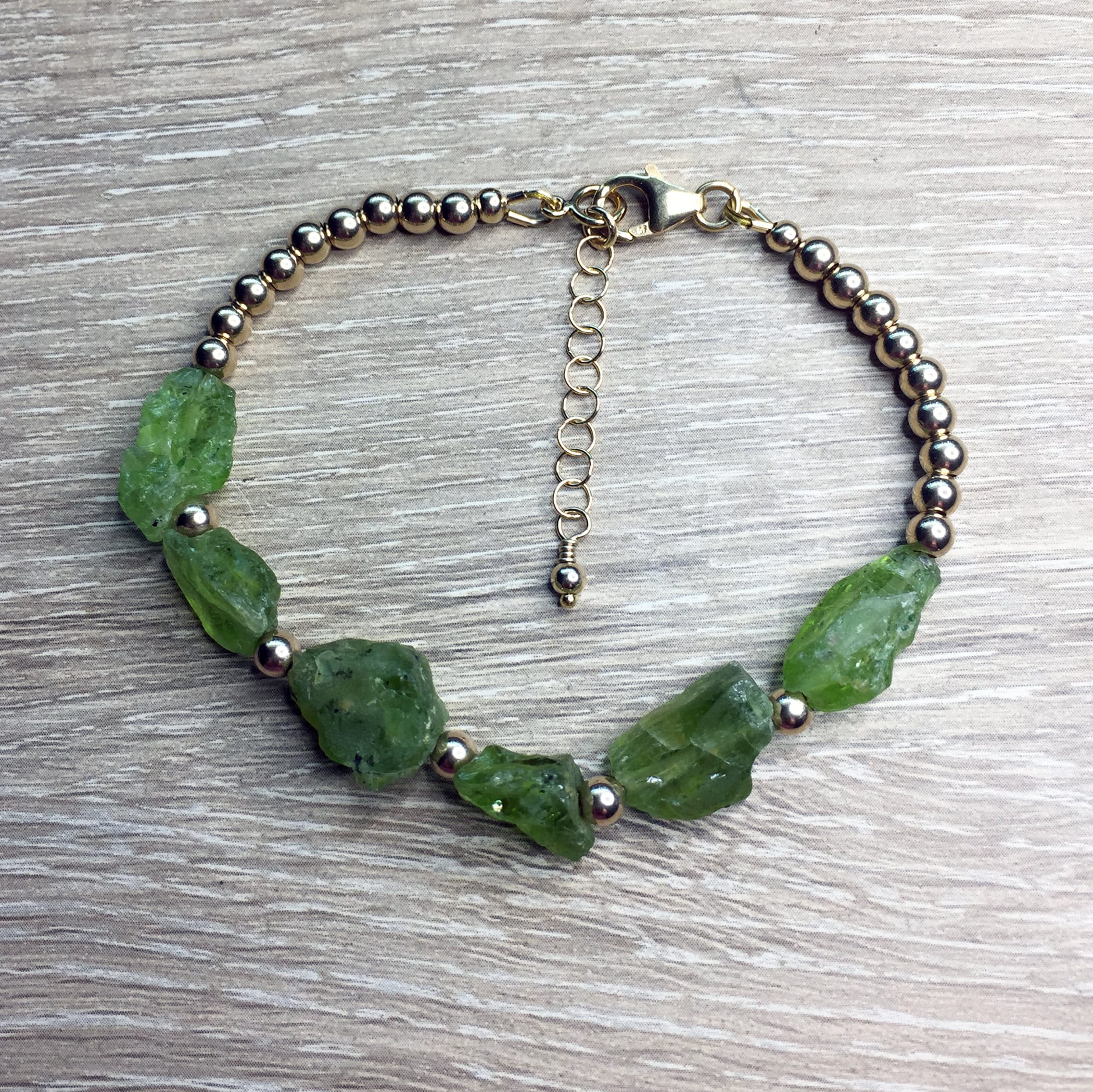 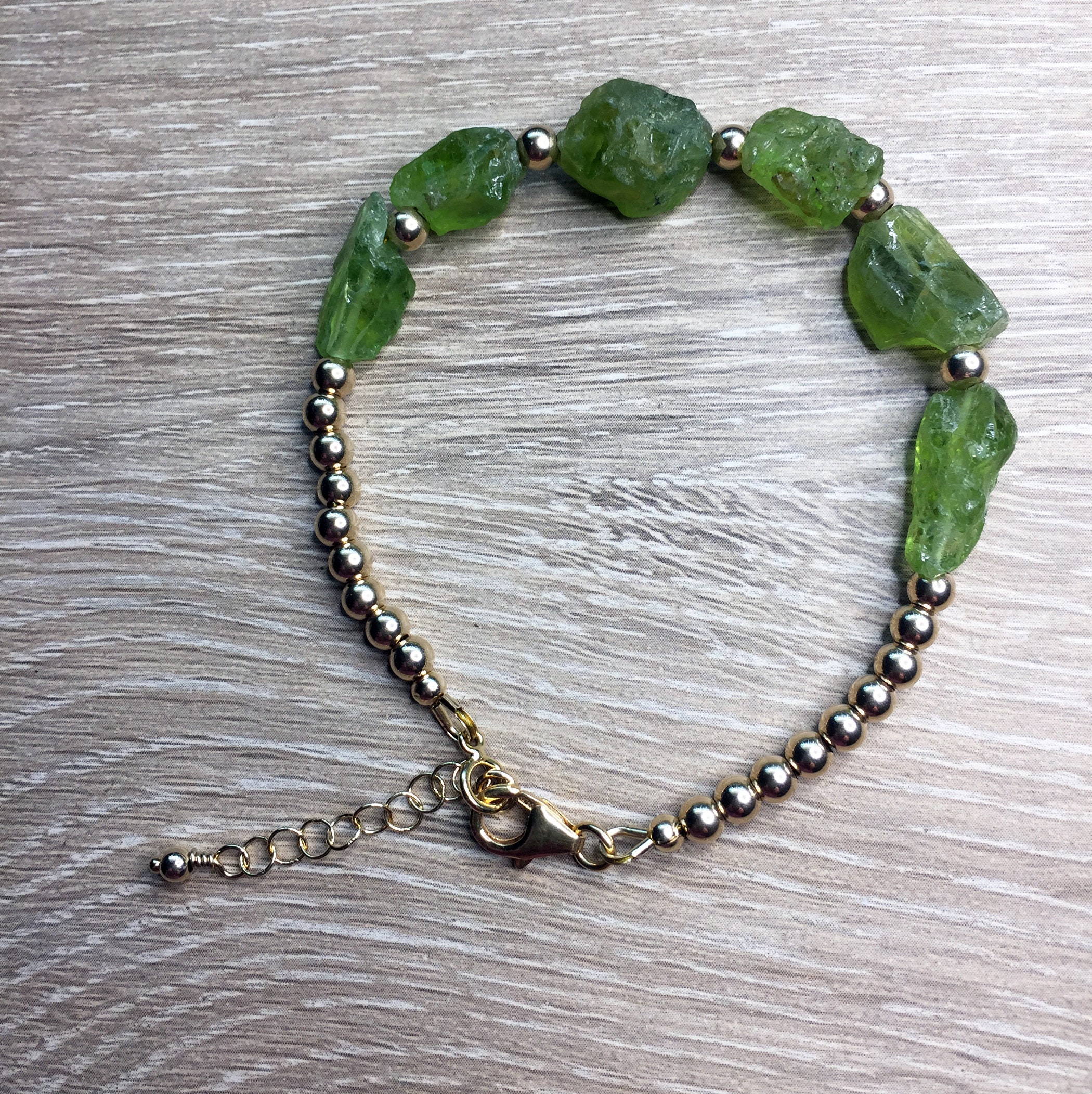 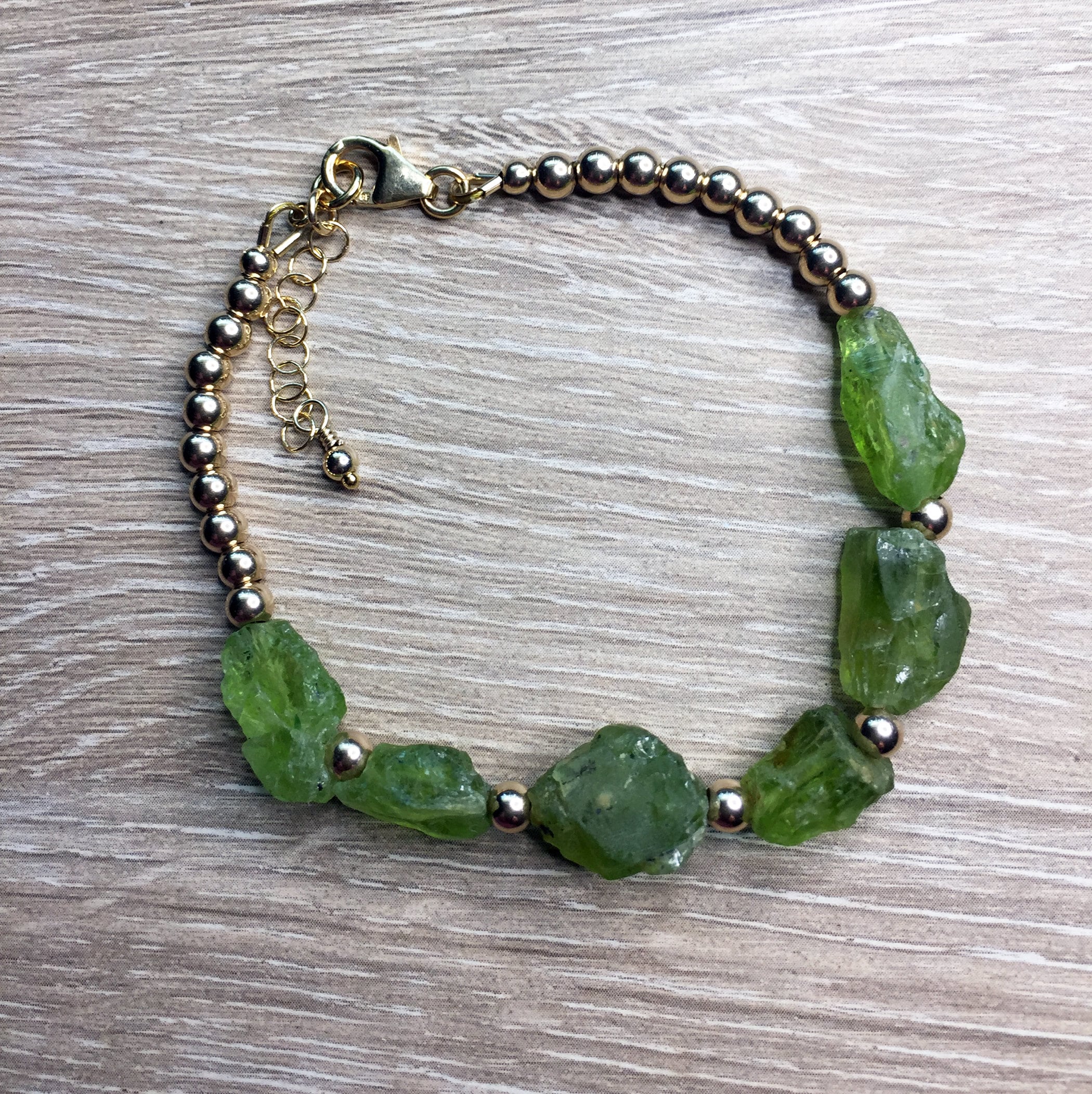 There are six rough-cut natural peridot gemstones paired with small gold-filled beads and a gold-fill lobster clasp on this 7 inch bracelet. There is also a one inch long extension chain. This is a perfect gift for someone with an August birthday or for yourself.

Care and Cleaning: Clean the beads with a damp soft cloth.

Shipping, Returns & Exchanges: Your necklace will be placed in an organdy bag and a box, then will be securely packaged and shipped within 1-2 business days (usually the same day). Full refund of purchase price if not delighted with your purchase. Please notify me within 7 days of receipt.


Shimmering, pale green peridot--often called the evening emerald--is a gemstone commonly associated with spirituality and expression. The word "peridot" can be pronounced as "PAIR-uh-doe" or "PAIR-uh-dot." While both pronunciations are found in the dictionary, the actual word of origin for peridot is from the French word peritôt, meaning unclear, because of the numerous inclusions and internal fractures often found within peridot gemstone beads. Chrysolite (an older German word) was also used to describe it before the word peridot was applied to all gem quality peridot stones. Sometimes also referred to as olivine, it is only found in one color--green. This uncommon green color is best known simply as peridot green and it varies from olive to brownish green. This green was highly prized by ancient admirers because it was often thought to be emerald, which is one of the greatest compliments peridot could ever receive. It is the national gem of Egypt, and the ancient Egyptians knew it as the gem of the sun. In fact, jewelry historians are now convinced that some, if not all, of the emeralds that Cleopatra was famous for wearing were not actually emeralds but deep green peridot stones from mines in Egypt.

Peridot has been written about extensively throughout history. In ancient times, peridot stones were used for talismans featuring carved donkeys for spiritual enhancement and carved vultures for controlling the four winds and evil spirits. Ancient Egyptian papyrus scrolls record the mining of peridot as early as 1500 B.C. on Topazo Island (now called St. John's Island) in the Egyptian Red Sea. The island's exact whereabouts became a mystery for several centuries until being rediscovered in 1905; navigators found it difficult to find as it was often shrouded in an impenetrable thick fog. Legend says that royal patrols that guarded the entire island were to execute trespassers while protecting the miners from thieves. The miners would collect the gems for the Pharaoh's burial treasury during all hours of the day and night, for it was said that the peridot crystals would radiate in the darkness of night by the light of the lamps they carried. The miners would mark the spot where they saw the glowing gems and then return to retrieve them the next morning.

In the middle ages, European emissaries brought back large quantities of peridot stones from their travels to foreign lands and decorated their churches and robes with them. One of these large peridot gems adorns the shrine of the Three Holy Kings in the cathedral at Cologne, and for centuries was believed to be an emerald but has recently been identified as peridot. Peridot, also known to ancient Hebrews, is listed in the Bible as one of the stones used in Aaron's breastplate and as one of the layers in the foundation of the city of New Jerusalem.

Peridot is not only terrestrial. Although many different gems can be found in meteorites that have fallen to Earth, the galaxy-traveling peridot is the only gem that is found in sizes large enough to be made into jewelry. These gem-carrying meteorites are called pallasites, and the peridot found in them is given a special name too (moldavite) to speak to its otherworldly origins. In 1749, one such meteorite was found on a desolate hilltop in Siberia, and it was discovered that this fallen star contained many pieces of beautiful, heaven-sent peridot crystals big enough to be used in jewelry. It is believed this particular moldavite-bearing pallasite fell to the earth's surface as early as 14.8 million years ago. In scientific communities, it is also believed that peridot crystals played a large role in the creation of the moon, and that now they comprise a large portion of the moon's mantle.

Peridot, the birthstone for the month of August, is also given in celebration of the 16th year of marriage. Known as the stone of compassion, peridot is believed to bring good health, restful sleep and peace to relationships by balancing emotions and mind. This friendly bright green stone also has the uncanny ability to inspire eloquence and creativity; it also brings delight and good cheer. It attracts love and calms anger by giving renewal to all things. The epic metaphysical powers that peridot possesses have been written about much throughout the ages. Legend says that if the gem is set in gold, the stone will develop its full potential as a talisman and will have the power to eradicate terrors of the night such as fearsome visions and nightmares.However, according to the great Roman philosopher, Pliny the Elder, peridot must be worn on the right arm to work its most potent dispelling. The stone’s ability to glow like a hot coal under lamplight at night helps chase away foreboding night visions. Peridot has been long considered a powerful aid to repairing and maintaining friendship and, supposedly, it frees the mind of envious thoughts that can damage and strain relationships. It has also been used to protect believers from the evil eye.