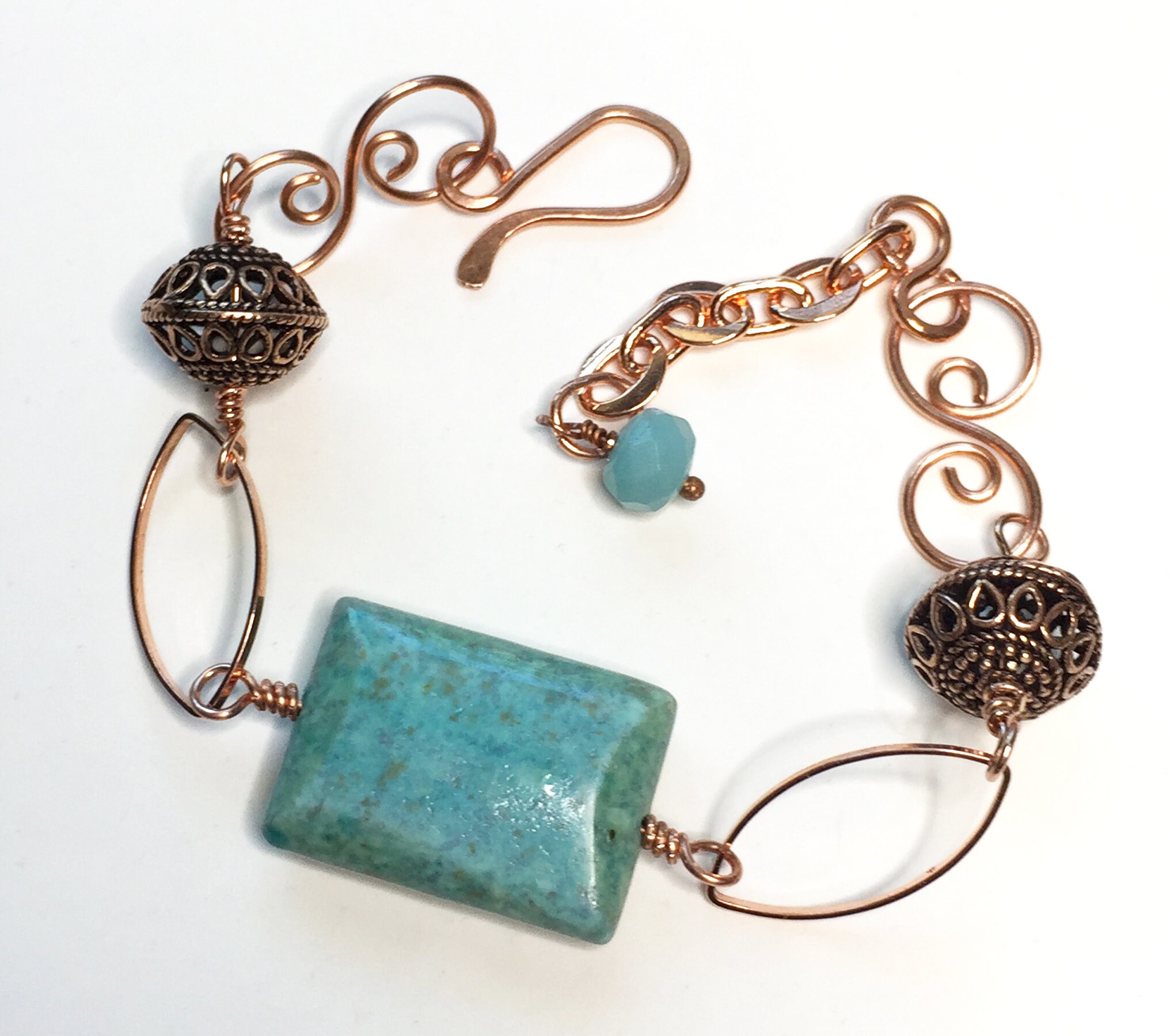 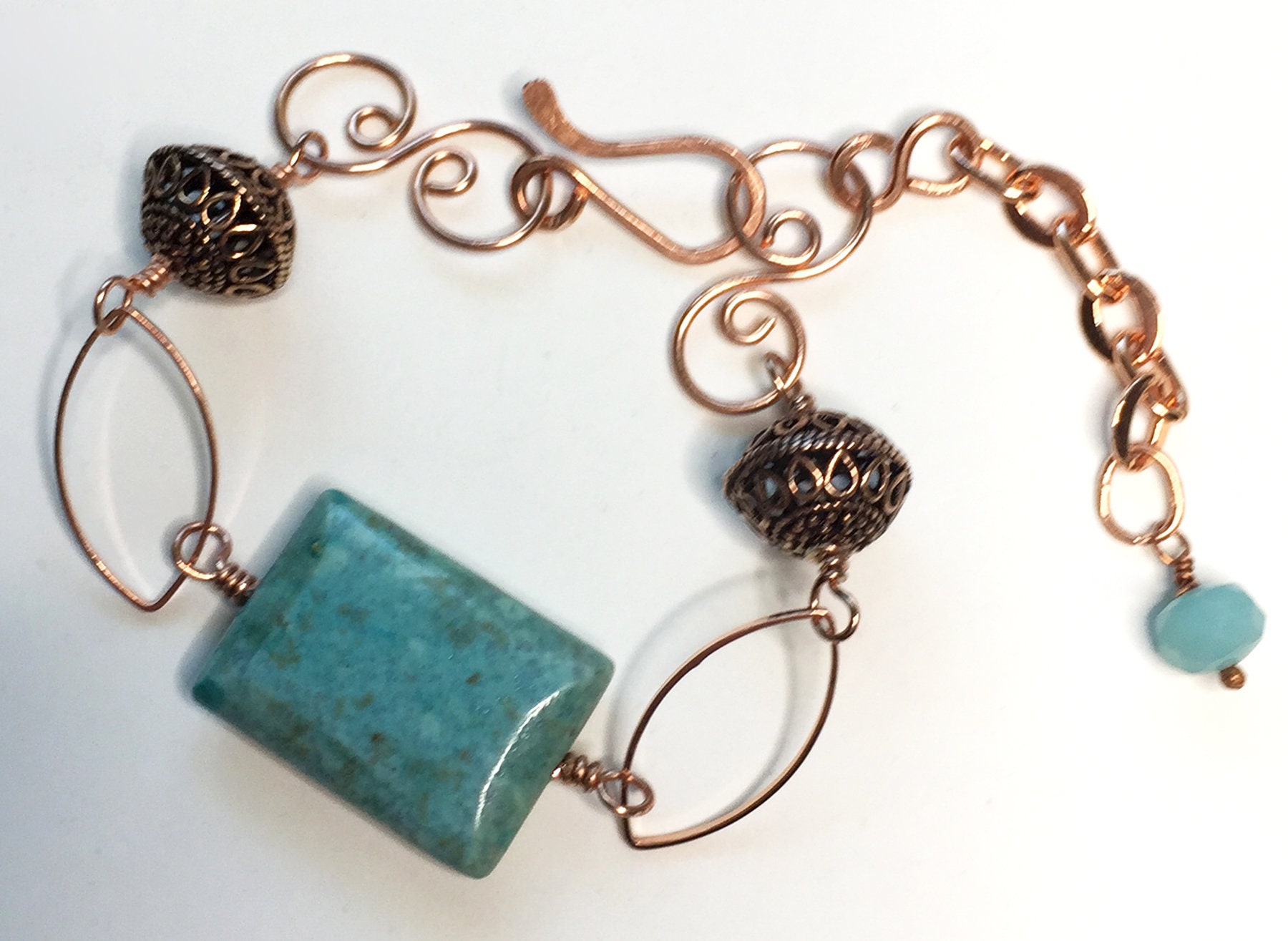 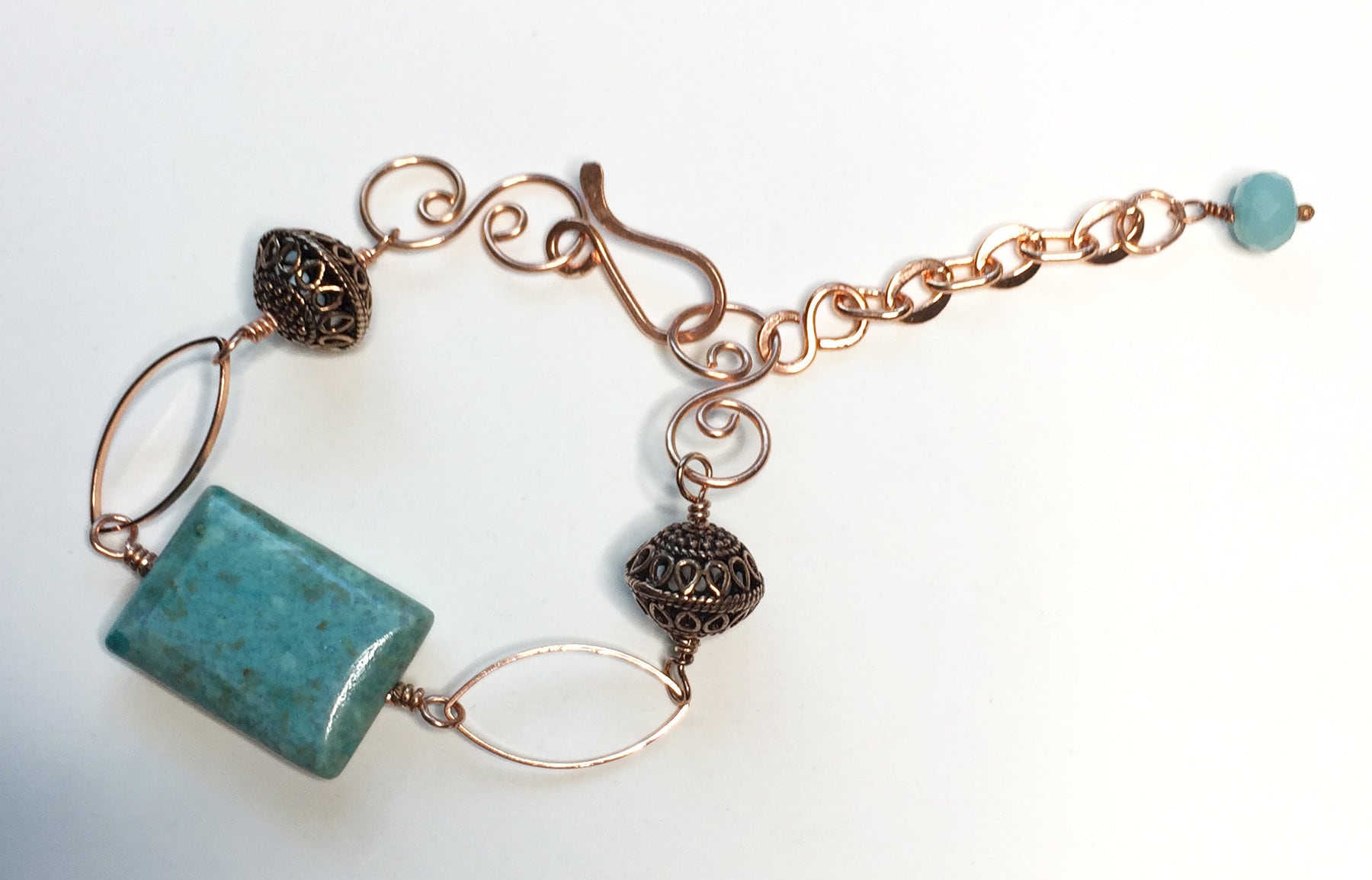 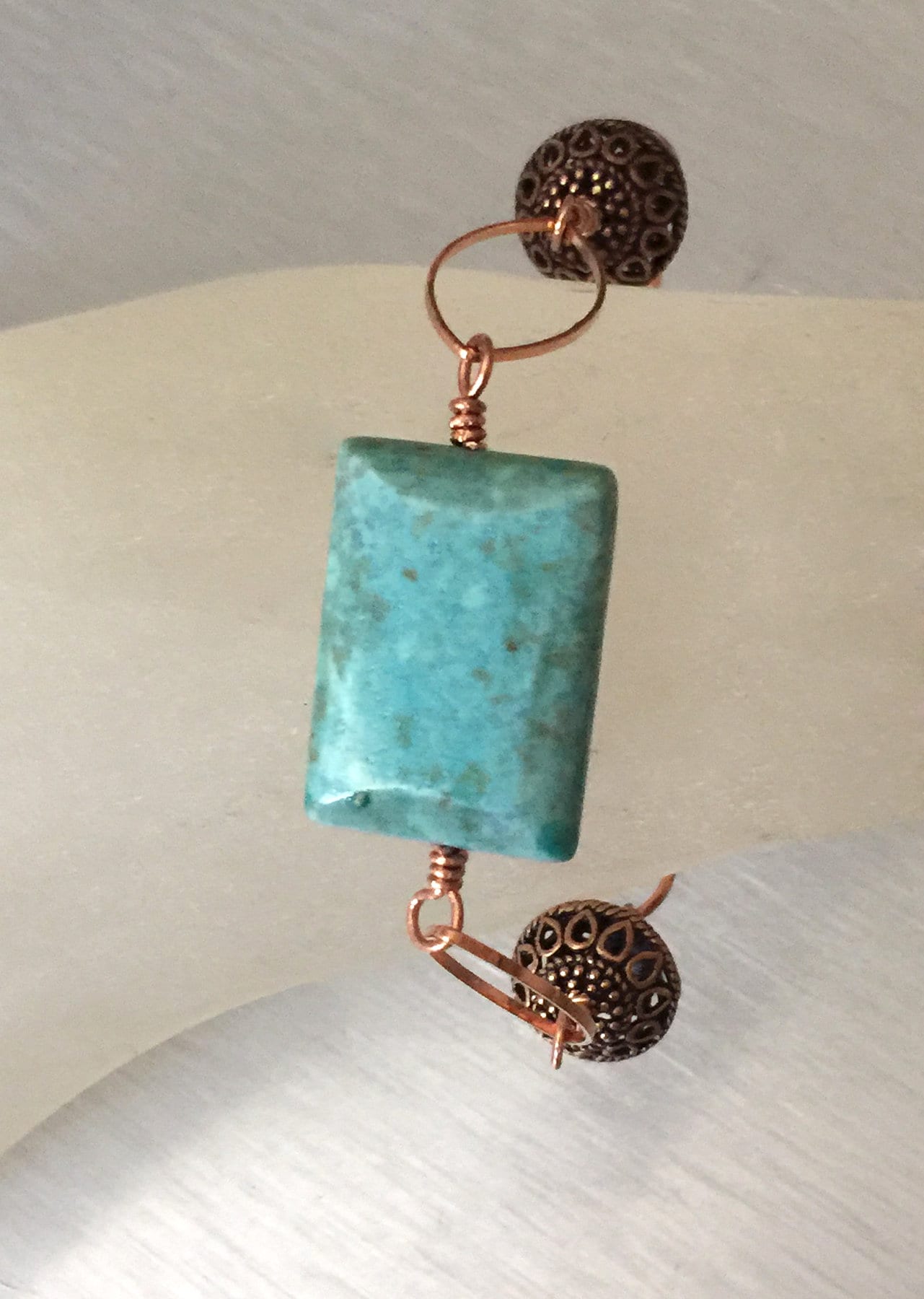 This solid copper link bracelet features a smooth 25mm chrysocolla stone, that has been gently faceted, as a focal point and two solid copper beads. There is a hand hammered copper clasp. The bracelet will fit a 7" to 8.5" wrist.

Care and Cleaning: Clean the beads with a damp soft cloth. The copper will tarnish and can be cleaned with any good copper cleaning product.

Shipping, Returns & Exchanges: Your bracelet will be placed in a heavy-duty plastic bag to help prevent tarnishing and a box, then will be securely packaged and shipped within 1-2 business days (usually the same day). Full refund of purchase price if not delighted with your purchase. Please notify me within 7 days of receipt.

Chrysocolla, the king of carbonate copper gemstones, is an alluring, vivid blue-green color and is often mistaken for turquoise because they share many visual similarities. It can often be found intermingled with malachite, turquoise and azurite, creating a wonderful mixed gemstone known as Eilat stone (named after the city where it was once mined). Legend has it that Eilat stone was originally quarried in King Solomon's mines in Africa--which is partly why it is the national stone of Israel. The rich, vibrant blue and green colors of chrysocolla are reminiscent of looking down upon the earth's surface from space. The name chrysocolla was first used to describe the stone by Theophrastus, a Greek philosopher and botanist, in 315 B.C. The word was derived from the Greek words chrysos, meaning gold, and kola, meaning glue, referencing the fact that chrysocolla was employed from the earliest times by goldsmiths as an ingredient for solder, called santerna by the Romans, to weld gold pieces together. This fancy gemstone has indeed inspired creativity in many artists, whether they were ancient goldsmiths using it as solder, Renaissance painters grinding it as pigment for paint or modern jewelry designer-artists including it within their designs.

This stone lends itself well to opulence. Nero was a Roman Emperor and well-known patron of the green faction of ancient Rome. These ancient factions were split into four colors: red, white, blue and green and were elite clubs that people felt loyalty to above all others. They would have many competitions, such as chariot races, and would do anything to ensure that their club would win and be proven superior. The green faction was the most dominant club, so when Nero was to take part in a race as a charioteer, he dusted the circus arena with ground green chrysocolla powder instead of using the customary sand. Chrysocolla can be found wherever large copper deposits occur, such as Africa, Mexico and the U.S. state of Arizona (where it is called Apache chrysocolla). Chrysocolla from the state of Arizona is a mixture of chrysocolla, turquoise, jasper, lapis, malachite and quartz crystal minerals.

Chrysocolla is the gentlest of stones. It's not a high-energy stone like quartz, rutilated quartz, or smoky quartz and--unlike malachite, azurite and lapis--it doesn't bring buried emotions to the surface. Its main role is to soothe, calm and inspire. Its color alone is soothing with a deep blue-green which might remind you of a distant mountaintop or the stillness at the bottom of the sea. For thousands of years, chrysocolla has been known throughout the world as a stone of calming reconciliation and reassurance. In ancient Egypt, it was called the "wise stone" because it shielded and encouraged the mind during negotiations. Those who wore it generally came up with clever compromises and resolutions. This stone also has the ability to help people who are violent to become more sensitive and tolerant which is why, as an ambassador, Cleopatra wore chrysocolla jewelry everywhere she went. Chrysocolla, with associations of tranquility, peace, intuition, patience and unconditional love, is known as a healing stone among Native American cultures where it has been used to strengthen the body's resistance to illness and emotional duress. It has also been used traditionally to bring about calm feelings where there is upset and can be used to purify a place or restore balance to a person.

Chrysocolla is not assigned to any particular month as a birthstone; however it's a wonderful stone to use in conjunction with turquoise in traditional December birthstone jewelry.

Chrysocolla has the ability to bring harmony, increase wisdom and guide you toward discretion. It promotes level headedness, encouraging clarity of thought and a neutral, calm attitude during turbulence by purifying the home, environment and the mind. Use it to decrease nervousness and irritability. The history of Apache chrysocolla being used as a stone of gentle healing coincides with the stone’s history in other cultures. Legends originating in Tibet and Africa also tell of healings through the use of chrysocolla. It has often been called multi-colored turquoise and, until recently, was not considered a gemstone in its own right until it was cited as a semiprecious gem rock. Then it became a favored stone for jewelry symbolizing prosperity, luck and fortitude. Chrysocolla is also a good choice to wear in order to alleviate difficulty expressing feelings or creativity. Chrysocolla should have its energies cleansed once a month by rinsing it under warm running water, and then placing it in a bowl overnight with a piece of genuine hematite to recharge it.